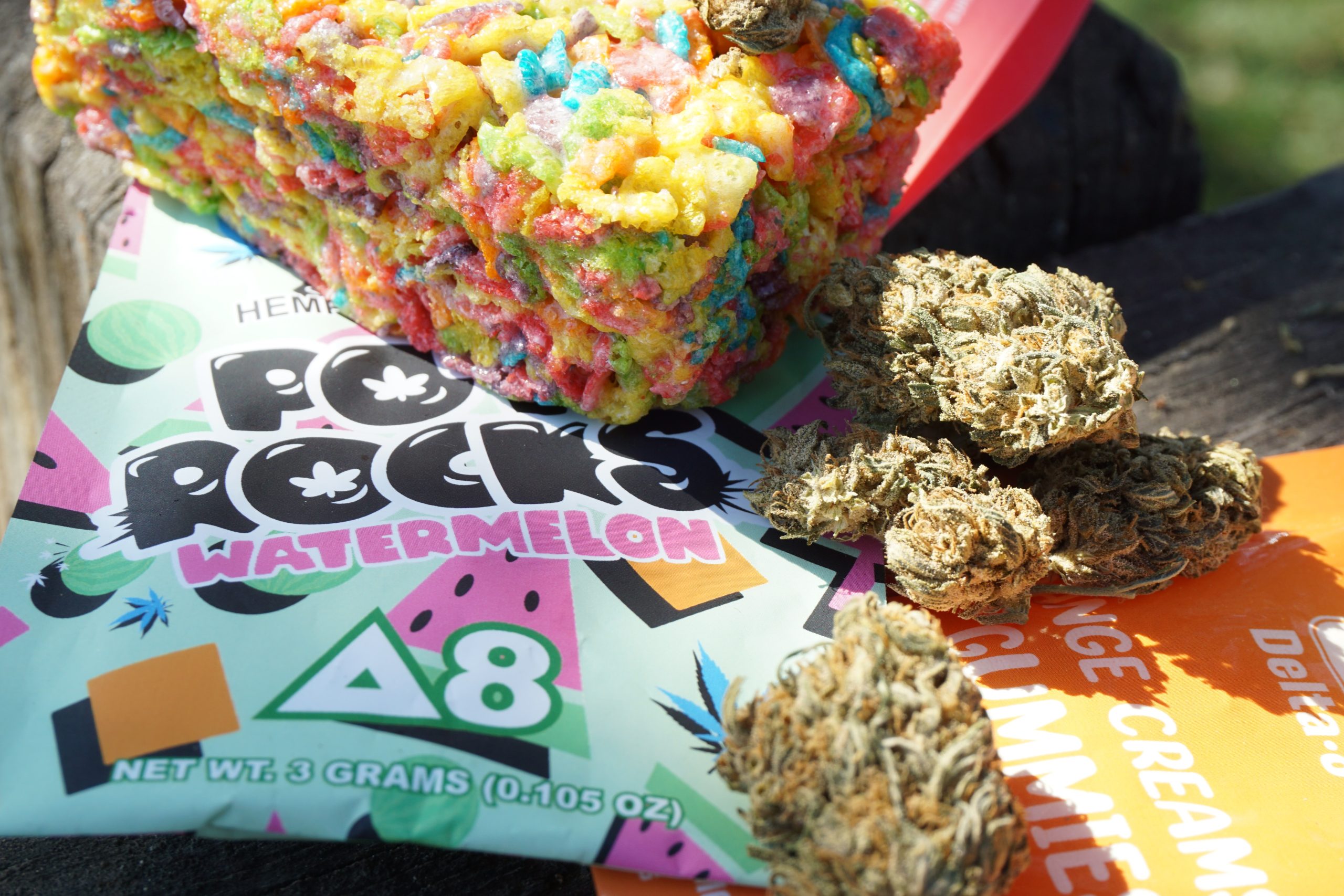 What is Delta-8-THC? Benefits, Side Effects, Safety & More Cannabis legalization has created an insane demand and hugely competitive market for cannabis. Products ranging from THC gummies to tinctures to vapes are all the rage, and yet, cannabis is still not quite legal across the US, so many are turning to Delta-8-THC.

Delta-8 can seem like a godsend. It offers a completely legal high, and you can purchase all of your favorite THC treats in areas where cannabis is not legal, and some even say that it causes less anxiety than traditional THC. But what exactly is Delta-8-THC and is Delta 8 safe?

Eager creators have found a loophole to help them capitalize on the cannabis craze by selling products made with a version of THC that’s made from legal hemp rather than the controlled substance cannabis. Delta 8 has created the cannabis equivalent of designer imposter products as whole businesses devoted to legal delta 8 products are cropping up.

Delta 8 and delta 10 are lesser known isomers of THC that can occur naturally in the marijuana plant in tiny quantities. Products featuring these compounds are growing in popularity as more copycats are eager to sell products and people want more access to cannabis.

Delta 8 is technically legal but not quite regulated which brings a whole host of issues when using it. Is Delta 8 legal everywhere? Is delta 8 dangerous? This article will give you a full picture of delta 8, how it works, and if it’s right for you.

Delta-8-Tetrahydrocannabinol (Delta-8-THC) is an isomer of the popular THC you know and love, which is chemically known as Delta-9-THC. Delta 8 can naturally be found in small quantities in the cannabis plant as it is a natural result from the breakdown of THC.

All cannabinoids are chemically related. They all start as a form of CBG and various biological processes in the cannabis plant will naturally convert them into acids like THC-A or CBD-A. Those acids are the most desirable compounds in cannabis and drive the bulk of medicinal marijuana.

When those acids are decarboxylated, or heated, they convert into THC and CBD, forms that can best be processed by your body. The human body has an entire endocannabinoid system that interacts with the hundreds of cannabinoids in weed. This system governs biological processes from hunger to immunity to inflammation to pain reduction.

Since cannabinoids are all related to each other, many can convert into other forms, whether over time, through oxidation, or exposure to heat and light. For example, as THC degrades it naturally becomes CBN, a more mildly psychoactive cannabinoid.

Similarly, high-CBD strains of hemp can be used to chemically create delta-8-thc. Since they’re legal, they give people access to CBD and other cannabinoids that are converted into different forms of THC (Delta 8 and Delta 10).

The criminalization of marijuana has always been a hot topic as human beings have been using medicinal marijuana for centuries. The 2018 Farm Bill, more formally known as The Agriculture Improvement Act of 2018, legalized the growth and cultivation of cannabis plants that contain less than .3% THC which are legally defined as hemp.

With this new line established between hemp and marijuana, marijuana being any cannabis that has a high concentration of THC, there’s a loophole. Given people’s interest in CBD and THC, it is no wonder that people found a way to meet the demand for cannabinoids and cannabis products while technically using hemp rather than marijuana.

Using various chemical solvents and reactions, the CBD harvested from hemp is converted into Delta-8-THC, a form of THC that’s similar but not quite your standard THC.

What is the Difference Between Delta 8 vs THC?

The basic difference between Delta-8-THC and standard Delta-9-THC is their chemical make-up. They are isomers, which to non-chemists, means chemical variants of each other. Essentially, they are almost identical but they have subtle chemical differences.

Both delta-8 and delta-9-THC bond to the same CB receptors in your endocannabinoid system so they can offer a similar experience. However, some say that delta 8 is less likely to cause paranoia and anxiety compared to traditional THC.

The largest difference is delta-9-THC develops naturally in the cannabis plant. Delta-8-THC can be found in trace amounts in cannabis, so it is technically natural, but it’s not the same Delta-8 you find on the market.

It would be way too pricey to cultivate natural Delta-8 as it exists in such small amounts. Instead, CBD is harvested from hemp and exposed to different chemicals like hydrochloric acid, p-toluene sulfonic acid, and alumina acid. It’s then washed, dried, and tested.

Most, if not all, of the delta 8 on the market is man-made. It would be most readily made from traditional THC but what is driving a lot of delta 8’s production and business is its shaky legal status.

Since it’s legal but not regulated some shady producers can ignore chemical remnants like heavy metals, pesticides, or solvents. Unlike delta 9 products which, in cities where cannabis is legal, require testing and dosage instructions, some products can be haphazardly made and potentially dangerous.

Both the Centers for Disease Control and Prevention and the Food and Drug Administration have issued warnings for potential concerns of poisoning and overdosing which can occur with delta 8 products.

This is also a key difference between delta 9 and delta 8 products. While delta 8 can be legal, it faces a lot less regulation while delta-9-THC products, in areas where it is legal, are governed by standards and practices that help ensure they don’t make you sick.

Does Delta 8 Have THC In It? Delta 8 is a synthesized version of THC so technically it doesn’t have THC in it so much that it is THC. However, this version of THC functions slightly differently. Naturally, THC degrades as it ages, and it can also oxidize thanks to light, heat, and oxygen. For tips on preserving your cannabis check out this article.

Does Delta 8 Make You High?

Delta 8 does make you high. For those interested in the science, delta-8-THC interacts with the same CB receptors as THC. Both delta 8 and delta-9-THC can bond with the CB1 receptors of the cannabinoid system which govern metabolism and cellular functions. This also helps contribute to the high.

In the same way that 1:1 CBD/THC edibles, products, and strains can vary slightly from traditional THC because of the “entourage effect,” delta 8 products also offer a different high. CBD can temper some of the psychoactive effects of THC so similarly delta 8 can offer a more subtle high.

If you find that edibles or smoking weed make you paranoid you may want to consider deta 8 to meet your medical marijuana needs as it offers similar health benefits but a different experience.

Despite the fact that delta-8-THC is technically federally legal, the fact that’s driving its popularity, some states have begun to outlaw it. Surprisingly, legalized cannabis products can have more rigorous testing and regulations than delta-8-THC products because they are a controlled substance.

Given the legal loophole, anyone can technically legally create delta 8 products meaning some products can offer incorrect dosages or not be properly prepared for human consumption.

This lack of regulation creates the opportunity for potential poisoning, overdose, and illness.

In Connecticut, Michigan, and Nevada delta 8 products are regulated like legal cannabis.

Even states where cannabis is legal like New York and California have taken a stand on delta 8. It’s currently illegal in New York and highly regulated in California.

Meanwhile, as of February 3, 2022, 37 states, three territories and the District of Columbia have legalized the medical use of cannabis products. Time may tell if marijuana legalization will eventually phase out the popularity of delta 8 products. Delta-8-THC intoxication is similar to delta 9 or traditional THC so that can include the same side effects:

That, of course, can be in extreme cases. However, since it’s not regulated there is a greater chance for overdose. There’s also the potential for children accessing delta 8 products and overdosing.

Some reports to the FDA have listed their negative side effects as hallucinations, vomiting, tremor, anxiety, dizziness, confusion, and loss of consciousness. There was even a report of a child’s death. Exactly how bad are delta 8 products?

This basically means you can be exposed to products with chemical remnants, including lead or mercury. They could be made in unhygienic conditions not to mention you run the risk of overdose.

A study by the US Cannabis Council found chemical remnants including hexane, acetone, and ethanol. Some inhalants also included the potential exposure to copper, chromium and nickel. That’s a serious exposure risk, imagine if traditional gummies had a chance of containing nail polish remover?!?

There hasn’t been adequate study for how some of these chemicals, even natural ones that occur in cannabis, can affect the human body in large concentrations.

There is rigorous testing of cannabis products to identify THC levels and cannabinoids. There are also standards and practices governing the medical marijuana industry. Delta 8 is almost like the Wild West. There are a lot of people entering the space and consumers are often finding out after they’re exposed that a product has made them sick.

Even chemists are concerned as many people are using processes they find in online forums and neglecting the risks of exposure to these chemicals.

Delta 8 isn’t inherently dangerous and in many states where cannabis is legal you could potentially even purchase products where the delta-8-THC is cultivated from cannabis.

Does Delta-8 Show Up on Drug Tests?

While delta 8 is technically legal, that doesn’t remove its similarities to delta-9-THC. This means that it can show up on drug tests. As essentially the same compound, when your body metabolizes delta 8, it leaves behind the same compounds in the body.

Many drug tests test for metabolites to confirm you’ve done the drugs. This means that delta 8 products have the potential to leave behind metabolites that can cause a positive or inconclusive result on a drug test.

Not to mention, some delta 8 products are not effectively tested and could contain actual delta-9-THC which would show up as a definite positive test result on a drug test.

Medical marijuana is providing so many people with natural and homeopathic solutions to pain management, nausea, and even treatment for major conditions. It’s great that people can potentially access these medicinal benefits from delta 8 products in areas where cannabis is not yet legal.

And yet, there is the potential for exposure to harmful chemicals, incorrect dosages, and products made in unsafe or unhygienic conditions. It falls on consumers to examine where they’re getting delta 8 and how it’s made.

It’s best to use caution when dosing delta 8 because while it’s not regulated there is the potential for dangerous consequences and overexposure. One major appeal of medical marijuana is that it’s completely natural and inherently interacts with the body.

The process of synthesizing delta-8-THC creates different levels of compounds and cannabinoids and there hasn’t been adequate study to know the effects of these concentrations on human beings in the long term.

Caution is key. If you’d like to explore traditional cannabis, consider applying for a medical marijuana card to ensure access to legal and medically regulated cannabis to treat your condition.