Parkinson’s & Marijuana: A Guide To Understanding 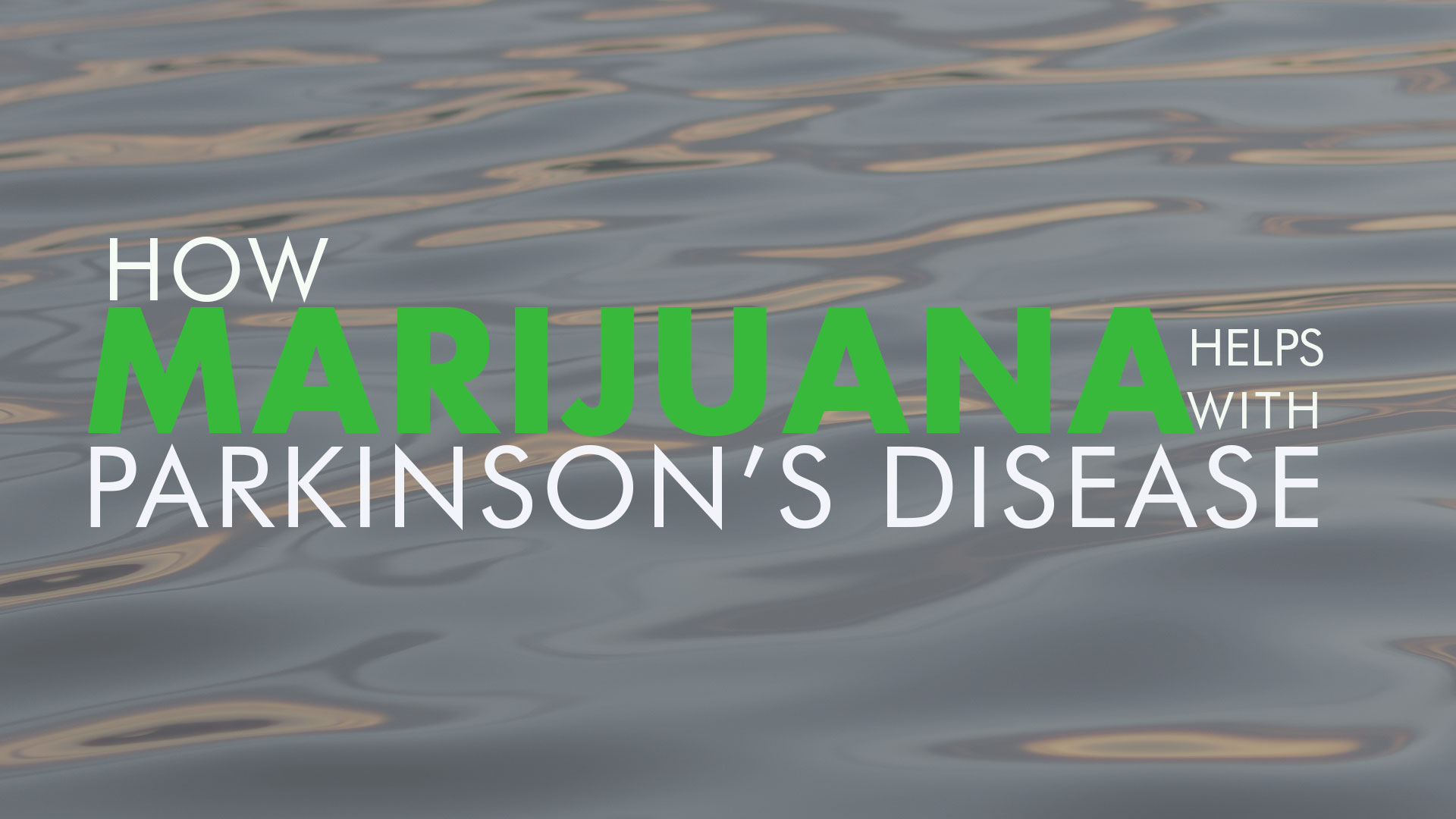 Marijuana has been used medicinally for literally ages, dating back hundreds, if not thousands of years. But laws, restrictions and propaganda stigmatized cannabis as medicine in the modern era. This stigma has taken decades to shatter. But one of the first medical conditions that was widely recognized by modern medical communities as possibly benefitting from cannabis use was Parkinson’s Disease. We’ll take a look at the science and research of Parkinson’s and marijuana, and explore how cannabis can help patients troubled by this tragic affliction.

Parkinson’s Disease is a progressive neurodegenerative disorder that slowly hinders, damages or affects movement of the body. In the early stages of the disease the side effects are generally minimal, limited to tremors. However, as the disorder progresses, the body may eventually become immobilized. Speech may be affected or halted altogether.

There is no known cure for Parkinson’s Disease. There are, at least, medications that keep symptoms somewhat minimized. Medical cannabis is among these medications in states where applicable. 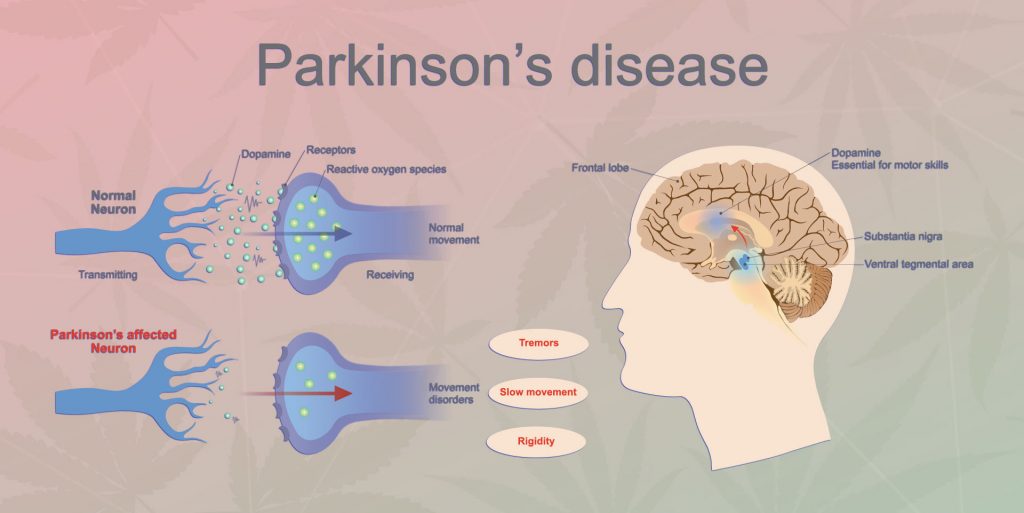 Below are several signs and symptoms of Parkinson’s Disease. Sadly, many of these symptoms will worsen as the disease progresses.

Tremors: The earliest signs of Parkinson’s come in the form of minor tremors, usually beginning with shaking or trembling hands or muscles.

Bradykinesia, or Slow Movement: The simple act of getting out of a chair becomes difficult without assistance.

Automatic Movement Impairment: Those with this condition may lose the ability to control automatic movements like blinking, nodding or bodily functions.

Altered Posture: Parkinson’s patients may not be able to stand upright over time.

Speech & Writing Difficulty: The ability to speak may be impaired, resulting in slurred speech or discontinued speech. Writing may also become impossible due to tremors.

Does Cannabis Helps Those Suffering From Parkinson’s?

Dozens of studies have shown that cannabis helps patients cope with the side effects of Parkinson’s, most notably loss of motor control and dopamine function. In fact, studies of cannabis and Parkinson’s has waged on for years. Tragically, there still isn’t enough research.

This 2019 study concluded exactly that. “Marijuana has been shown to attenuate motor and nonmotor signs and symptoms of PD,” the study states. “However, there are limitations to the available research, including small sample sizes and lack of standardized clinical outcome measures.”

Other studies, like these, have concluded the same thing. While there is a lot of evidence that marijuana might be significantly beneficial to Parkinson’s patients, there simply isn’t enough research.

That said, anecdotal evidence, like the video below, are more than a little compelling. And other studies have been more conclusive in stating that cannabis helps patients cope with Parkinson’s.

The Parkinson’s Foundation: Their Take on Marijuana

Even the Parkinson’s Foundation has begun to recognize the medicinal benefits of marijuana. They conducted a study with Northwestern University that audited physicians input on the subject of medical cannabis.

This study had a few surprising conclusions. For example, 95% of neurologists reported patients having asked them to prescribe cannabis. Only 23% of the physicians had any formal training on cannabis, the endocannabinoid system or the medicinal properties of cannabis. Of that group, only 11% made the recommendation of cannabis to patients.

In lesser words, more physicians need to be educated on the studies and evidence that support cannabis as a treatment method for Parkinson’s Disease. Thankfully, the Parkinson’s Foundation seems poised to help move that needle forward.

There is no known scientific study or research to indicate that cannabis will ever be able to outright cure or prevent Parkinson’s. That doesn’t mean that cannabis isn’t a great tool for physicians and practitioners to try with patients who are not responding to traditional Parkinson’s medication options. But don’t expect a miracle. 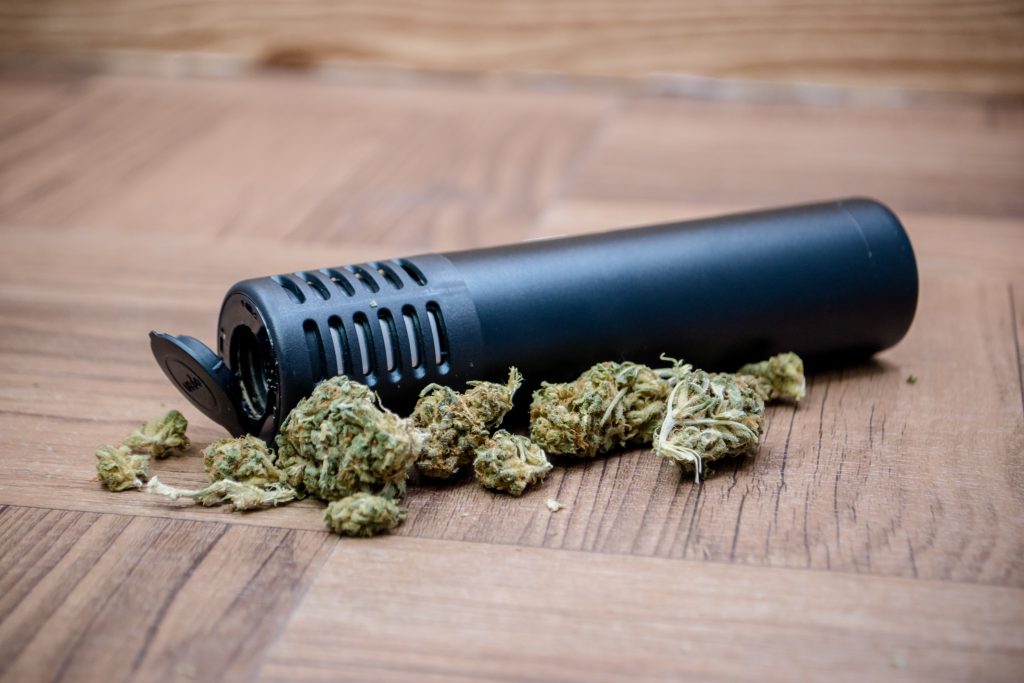 The Best Method For Parkinson’s Patients To Medicate with Cannabis

Patients with Parkinson’s Disease will want to look to CBD-heavy strains, or indica strains, as they can reach the endocannabinoid system throughout your body and help relax shaking or spasming muscles. This may also reduce tremors and ease general anxiety.

Sativa strains are great for a head rush, or a burst of energy, but are less effective with Parkinson’s patients because they don’t reach the body in quite the same ways as an indica or CBD-heavy strain.

Patients can smoke, vape or even eat cannabis to achieve a positive effect. Smoking isn’t the best method (or is illegal in some states), but many patients still prefer this old tried-and-true method.

However, vaping and edibles are a better way to administer cannabis. Parkinson’s patients can either take a bite of a brownie, or eat a gummy. Or they could even have a caretaker administer a drop of a cannabis tincture, sublingually. Many patients actually prefer this method because of its quick release and effectiveness.

Getting Your Marijuana Card

If you have any questions about qualifying in your state, or you’d like to know more about medical cannabis, give our support team a ring at 1-877-242-0362. Our staff can set you up with an appointment, or simply answer any questions about cannabis you may have.

You can also check out our medical conditions page to understand more about how cannabis works to heal the body. You can also view our cannabis education page for additional studies.