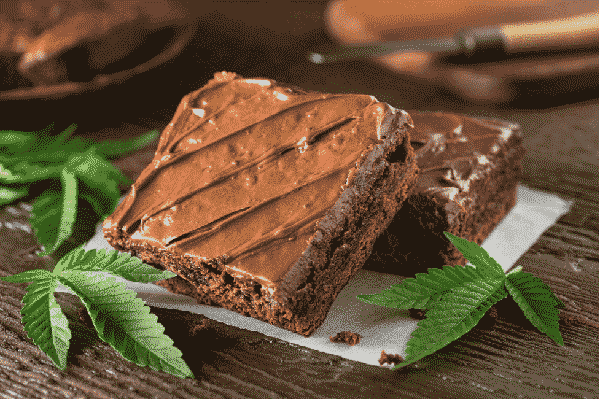 When people think of marijuana, they tend to associate it with some form of smoking. However, another popular way to consume marijuana, without the harsh burn of smoking, is by eating it.

Thanks to a variety of successful legalization campaigns across the United States, marijuana is finally reaching mainstream acceptance. That means that there are now practically endless kinds of marijuana edibles out there. These days, you can find recipes for cannabis nut butter, barbeque sauce, protein shake, guacamole, and even cheese.

While you can pick up pre-made edibles from your neighborhood dispensary, you can also make your own marijuana treats from the comfort of your own home.

Making marijuana edibles is both easy and fun. If you want to try your hand at making your own infused concoctions, then you’ve come to the right place. In this guide, we’ll show you the basics behind cooking with cannabis and some delicious recipes that you should definitely try.

A cannabis edible is any food or drink that’s been infused with cannabis compounds. Edibles are a great choice for people who don’t want to smoke marijuana but still enjoy the effects.

Edibles come in all kinds of forms of potencies. You can find them as brownies, gummies, sauces, teas, and much more. You can turn pretty much anything into an edible and make it as strong or weak as you want.

If you were to eat the marijuana plant raw, you’d feel little to no effects. The reason for this has to do with decarboxylation.

What is decarboxylation? To put it simply, it’s the process that activates compounds in marijuana, such as THC. THC starts as THCA but only takes on psychoactive properties after being converted into THC.

In order to “decarb” your cannabis, you need heat and time. When you smoke raw marijuana, the cannabinoids immediately decarb because of the extremely high temperatures present. This makes them immediately available to be absorbed via inhalation.

While decarbed cannabinoids as vapor can easily be absorbed by the lungs, edibles require these compounds to be present in the food that we eat in order for them to be absorbed by our bodies during digestion.

Heating cannabinoids at lower temperatures over longer periods of time will let us decarb the cannabinoids while keeping the integrity of the material. This will allow us to infuse the product into the edibles.

The THCA in marijuana starts to decarb at around 220 degrees Fahrenheit after around thirty minutes of exposure. It might take longer to fully decarb the cannabis.

In order to preserve the terpenes, you might want to decarb the marijuana at lower temperatures for a longer amount of time.

How to Decarb Cannabis at Home

Let the marijuana bake for at least thirty minutes.

Marijuana can also be decarbed in a slow cooker by introducing solvents like lecithin or cooking oils. These techniques make infusions that can be used for cooking recipes, creams, and even cannabis capsules.

How to Store Edibles After Cooking

It’s important to understand that the edibles that you make are cooked or baked goods just like any other. Because of this, they’re going to have the same shelf life as any regular food that you cook up.

Your edibles will go bad or stale just like normal food would. In order to keep your marijuana edibles fresh, it’s best to store them in sealable bags or containers so that they can stay tasty and fresh.

For baked treats, you can even put them in the refrigerator in order to keep their shelf life. With that said, there’s nothing wrong with eating a stale brownie. It may not taste very good, but it’ll still be effective.

Some amount of THC will usually stay active for up to six months. Your main concern is making sure that your food doesn’t get moldy or spoiled.

It’s also crucial that you always keep your edibles out of reach of children. Consider labeling your edibles so that your roommates don’t accidentally end up getting more than they bargained for when they try that piece of carrot cake.

How to Measure Edible Dosage for Baking

It’s always a good idea to begin with a small amount of marijuana when you make infused oil, butter, or anything else. Most recipes call for equal parts cooking ingredients to marijuana. For example: one cup of oil to one cup of ground cannabis.

However, if this is your first time making edibles, then it might be better if you used even less. It’s much better to end up with a batch that’s weaker than expected rather than one that’s too powerful.

How to Make Cannabutter

One of the best and most popular ways to make infused marijuana edibles is with cannabutter. However, it can also be a bit tricky. In order to activate the THC in the butter, the marijuana first needs to be heated slowly at a low temperature.

To make this infusion, you’ll need one cup of butter to one cup of ground cannabis. Before you mix the two ingredients together, you’ll first have to decarb the marijuana flower that you’ll be using. If you don’t decarb, the marijuana will be effectively useless.

While some recipes will tell you to decarb the marijuana in the butter, this can lead to a dish that doesn’t taste as good as regular butter. Because of this, it’s best to decarb before mixing.

After your bud is decarb, it’s time to melt the butter. To do this, add one cup of butter and one cup of water to a saucepan. Let the butter melt while simmering on low.

Adding the water will help to make sure that the butter doesn’t burn. As the butter starts to melt, you should then add the ground cannabis flower.

Maintain a low heat and let the mixture simmer for two to three hours. Make sure to stir every so often.

When you’re done, strain the cannabutter with a cheesecloth. Don’t squeeze the cheesecloth because plant material can get through and affect the taste.

Refrigerate the butter. After the butter has cooled, you’re good to use it in whatever dish you’d like.

How to Make Cannabis Coconut Oil

Coconut oil is one of the best oils that you can use for cannabis infusion. There are several reasons for this.

First, coconut oil contains a high concentration of fatty acids (saturated fats). This means that coconut oil can become a strong binding agent for the cannabinoids.

When you compare it to olive oil, coconut oil has twenty percent more saturated fat and is much better at retaining cannabinoids during infusions. It also has a variety of health benefits.

Another major benefit of coconut oil is that it will remain in a solid state at room temperature. This makes it a great pick for people who want to use it as a topical agent.

Also, the fact that it’s a solid means that it’s easy to store in gelatin capsules, which are popular and effective ways to consume marijuana.

To start, you’re going to need one cup of coconut oil to one cup of ground marijuana flower. Don’t decarb the marijuana beforehand for this recipe.

Instead, combine the cannabis and oil in a saucepan and heat them together on low for a few hours. This will decarb the marijuana without scorching it. Make sure to stir occasionally.

You can also add water to ensure that it doesn’t burn.

How to Make Marijuana Brownies

Are you wondering how to make delicious brownies that are also going to provide you with the potent effects of marijuana? If so, then look no further. This dish is sure to please anyone with a sweet tooth.

First, preheat your oven to 350 degrees Fahrenheit. Grease a baking pan and set it aside.

If you have an electric mixer with a paddle attachment, now’s the time to use it. Beat four eggs in a bowl with the mixer on low speed. Then, add 2/3 cup cannabis oil and two cups of sugar, beating for ten minutes.

While that’s going on, sift together 1/2 teaspoon salt, one teaspoon baking powder, three tablespoons of cocoa powder, and 1.5 cups of all-purpose flour. Then, slowly add the egg mixture, mixing just until combined.

Stir in one cup of chopped pecans and one teaspoon of pure vanilla extract. Pour your batter into your greased baking dish.

Bake until the edges of the brownies just start to pull away from the pan. This should take around thirty minutes. Then transfer the pan to a wire rack to cool.

If you’re looking for a treat that’s salty, sweet, and nutty, then you’re about to be in heaven.

To make this dish, you’ll first have to preheat your oven to 350 degrees Fahrenheit. Grease two baking sheets and put them to the side.

Fold the dry ingredients into the wet ingredients with a wooden spoon. If you want, you can even add in bacon bits for a little savory kick.

Drop your cookie dough onto your greased baking sheet as little round balls. Use a fork with long tines to press each ball of dough twice to flatten them. You want to make a cross pattern on the top of each cookie.

Now, sprinkle one part sea salt and two parts sugar lightly over the tops of the cookies.

Bake your cookies for around ten minutes. Don’t overbake them. When they’re cooked, remove them from the oven and let them cool on a rack.

How to Make Cannabis Tea

Cannabis tea is a great choice for anyone who wants the relaxing and medicinal benefits of tea as well as the beneficial effects of marijuana.

That’s it! Sip your tea and enjoy!

The Importance of Knowing How to Make Incredible Edibles

Marijuana has the ability to greatly improve the health and well-being of people all over the country. For those who want the benefits of cannabis but don’t want to feel the harsh burn that comes with smoking, edibles can be an effective and delicious alternative.

Hopefully, after reading the above article, you now understand what it takes to make edibles and have already come up with some ideas of what you’re going to make in your kitchen.

Are you interested in getting your medical marijuana card certification so you can start making edibles? Contact us today and see what we can do for you.