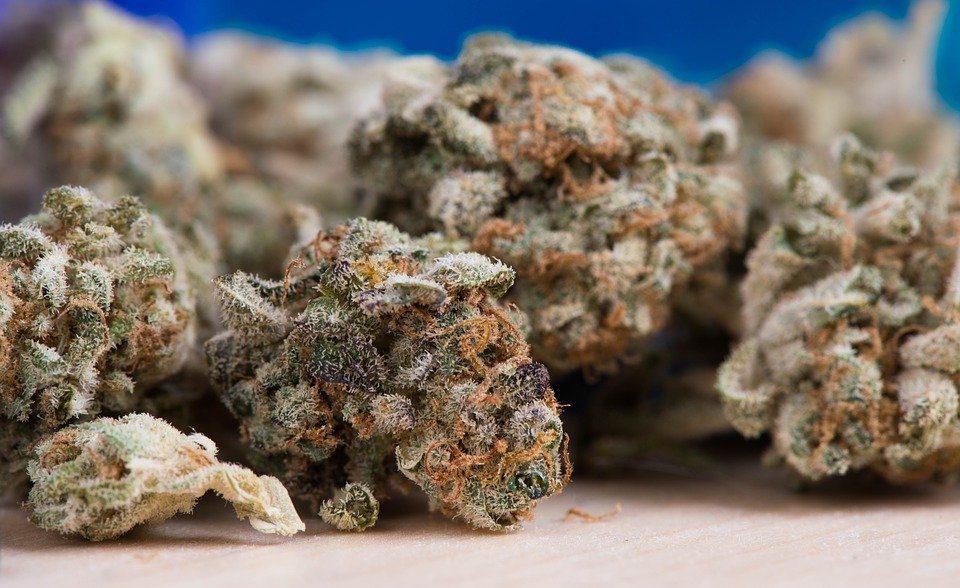 As cannabis cultivators continue to crossbreed various strains of marijuana, we’re introduced to the strongest weed strains we’ve ever seen. The highest THC strains of today seemed impossible just 20 years ago. Whether you’re looking for heightened effects or your tolerance is too high to benefit from average strains, you’ll benefit from knowing our picks for the most potent indica, sativa, and hybrid marijuana strains.

If you still have questions after reading this post, Green Health Docs can help. GHD offers medical marijuana card certification in numerous states, and their licensed physicians can answer all your questions and help you to get approved. Green Health Docs has clinics located in multiple states across the country, and GHD even offers telemedicine evaluations. Contact Green Health Docs today.

A winner at the 2018 Karma Cup, Skywalker OG is generating tremendous interest for its powerful sedative effects. It was crossbred from two other highest THC strains, Skywalker and OG Kush, though its origins aren’t entirely known.

This is technically an indica-dominant hybrid, but since the indica often overpowers the sativa by as much as 90:10, it fits much more comfortably into the indica category. The THC content has been known to peak as high as 26%, making the psychotropic effect more powerful than that of any pure indica you’re likely to find. It has a spicy herbal aroma and flavor profile that’s familiar to Kush enthusiasts.

The hybrid profile and high THC provide both a mind-and-body high, relaxing the physical senses and contributing to excessive couchlock while also promoting a sense of giddy lightheadedness. It’s an excellent strain for when you want to relieve both your mental and physical stresses.

It may promote extreme lethargy and laziness that lasts for hours, so it’s recommended exclusively for nighttime use. Since Skywalker OG is truly one of the strongest weed strains, it may be useful for chronic pain, insomnia, anxiety, and depression. Avoid morning use, as some users have reported being virtually catatonic after just two hits.

Silver Haze gets its name from the glistening silver layer of THC glands that coats its buds, and that should tell you everything you need to know. The strain averages 23% THC and is known for having powerful cerebral effects. An intense sense of euphoria grips the user almost immediately, which is why it is sometimes used for stress and anxiety. It’s also used for focus, as it provides energy without sacrificing clear-headedness.

Developed by the breeders at Sensi Seeds as a hybrid of Haze and Northern Lights #5 (more on that one below), this highly potent strain was a bronze winner at the 2005 High Times Cannabis Cup and remains one of the most potent sativas available. The effects are fast-acting and powerful because there’s almost no CBD to offset the psychoactive effects of the THC.

Do not confuse this strain with Super Silver Haze, a newer strain with less THC and less potent effects. The original Silver Haze remains one of (if not the) strongest weed strains of all the Haze varieties.

Arguably one of the strongest cannabis strains ever cultivated, the aptly named Memory Loss has been tested with THC levels as high as 31%. Created by the West Coast breeders at Archive Seed Bank, this strain is a 70:30 sativa-indica hybrid with only trace amounts of CBD to counterbalance the mind-numbing psychoactive effects. It was created by combining two other powerful indica and sativa strains, Amnesia Haze and Face Off OG.

The effects set in almost instantly. The initial reaction has been described as “an almost immediate onset that smashes into your brain, leaving you completely out of it and really unable to focus at all.” Because it’s known to make the mind race, the strain is not recommended for users prone to bouts of paranoia. This is recommended for experienced users only.

Memory Loss may be suitable for experienced users seeking increased focus and energy. While the initial effects can be powerful, the good news is that some users have reported an easy comedown without a major crash.

An enormously popular indica for good reason, Northern Lights takes couchlock to another level. One of the purest indicas available, it features a high THC content (up to 18%) coupled with moderate CBD (up to 2%). It’s believed to have originated near Seattle in the 1970s before being propagated by famed breeder Neville Schoenmakers in the Netherlands.

This is an excellent option for chronic pain and anxiety, as it’s known for promoting physical and mental relaxation and also sleep. This variety is rich in myrcene, a terpene that works as a muscle-relaxant and anti-inflammatory agent. It also contains moderate amounts of caryophyllene, which may act as a natural digestive aid and pain reliever.

A descendant of indigenous Afghani and Thai strains, Northern Lights has won more cannabis awards than any other strain, and it’s widely available in dispensaries across North America. It has a sweet and spicy aroma, and the effects are long-lasting. Just be sure to reserve it for times when you’re able to relax, as its sedative effects are powerful.

If you’re looking for this one at your local dispensary, be sure to ask for Northern Lights #5. There are several breeding varieties of this popular strain, and #5 is the most potent and powerful.

Named for its invigorating citrus aroma, Lemon Meringue is a fan favorite in Colorado and California dispensaries. The THC content has been measured as high as 28%, and the intense cerebral effect resulting from the THC has made it a preferred strain among people seeking relief from ADHD symptoms.

A newer option to hit the market, Lemon Meringue is the child of Cookies & Cream and Lemon Skunk, two popular high-THC strains. Developed by the breeders at Exotic Genetix, it is described as delivering “an amazing high” and “a focused and long-lasting high that will have you feeling lifted for hours on end before fading away into a sleepy comedown.”

As a medical strain, Lemon Meringue is noted for having a much higher-than-average concentration of cannabigerol (CBG), the parent cannabinoid of THC and CBD. CBG is being studied for its ability to stimulate appetite, relieve inflammatory bowel disease, suppress bacterial infection, and even treat Huntington’s disease.

This sativa-dominant hybrid was developed by cross-breeding three potent varieties of cannabis: Mexican sativa, Thai sativa, and Afghani indica. Though its origins are somewhat shrouded in mystery, it’s believed to have been created by two brothers in Northern California in the 1970s.

This herb has a pepper-like flavor and produces a mighty cerebral high. Thrillist warned that too much of this ultra-potent strain “can have you peeking out the windows and calling the cops on yourself.”

Because the strain favors sativa over indica by a 70:30 margin, you’re getting a lot of THC without a lot of CBD, and that means a powerful head high. Nevertheless, the indica effects are still present, so the experience can begin as a rush of energy that ultimately plateaus and ends with a lethargic stupor.

The high THC content (up to 19%) makes the strain a favorite for combating headaches, chronic pain, and inflammation. Like many medically preferred strains, Trainwreck is also rich in myrcene, a terpene studied for its anti-inflammatory properties. Terpinolene, another abundant terpene found in Trainwreck, is being studied for its anti-cancer and antioxidant properties.

Choosing the Strongest Cannabis Strains for Your Needs

If you’re a medical marijuana card holder, you might not need the highest-THC strain to get the desired result. However, if your current medicine isn’t having enough of an effect, your THC tolerance may be such that you need a higher concentration.

Before reaching for the strongest cannabis strains, though, remember that achieving a medicinal benefit is about more than just THC. You have to consider the full cannabinoid and terpene profile. THC may be useful for pain, muscle spasms, nausea, listlessness, glaucoma, lack of focus, and insomnia. CBD may be useful for seizures, anxiety, inflammation, and nausea.

Finally, be aware that the highest-THC strains may have greater side effects, including dry mouth, increased heart rate, memory loss, lack of coordination, and possible temporary psychosis.