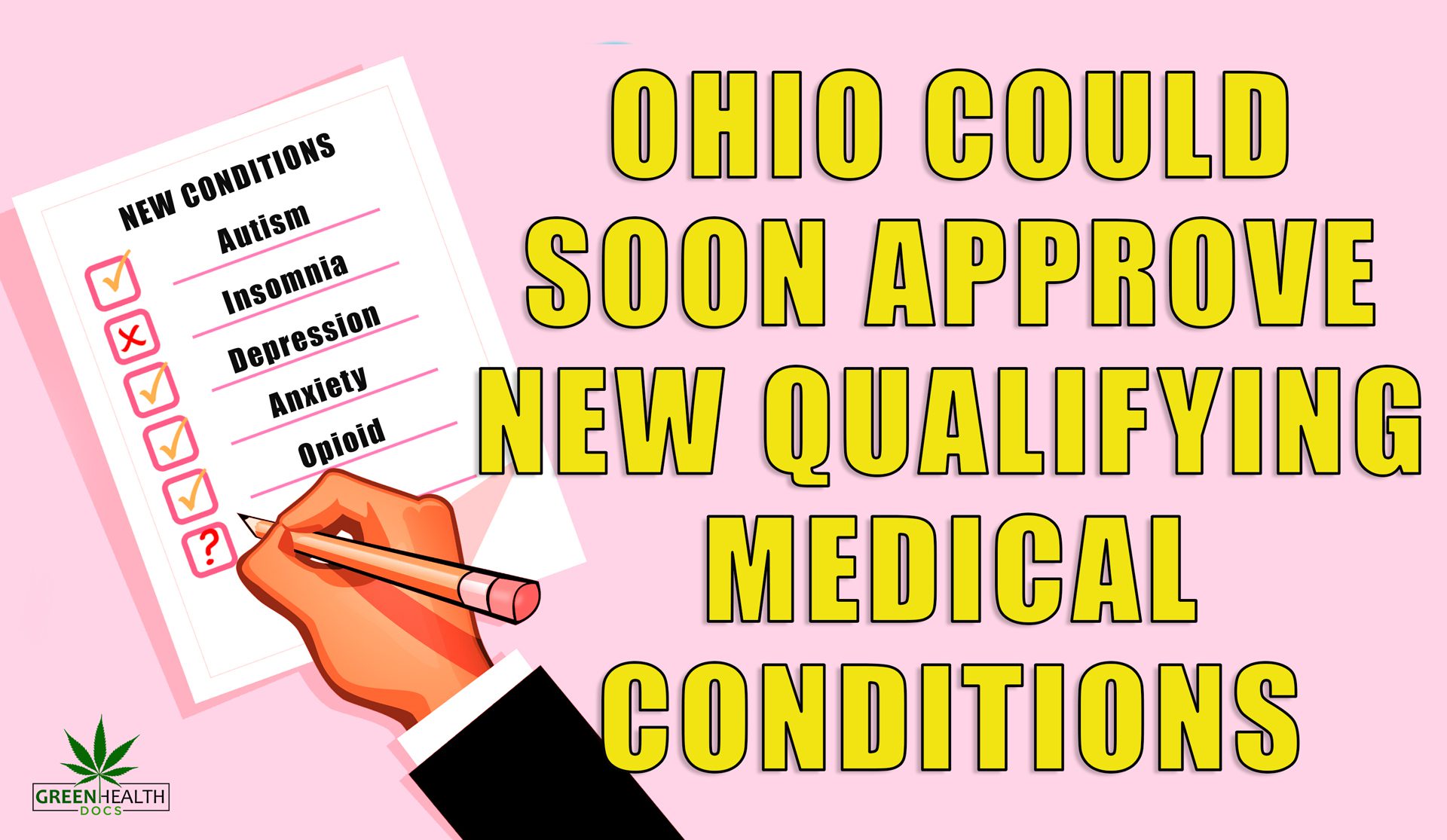 There are 21 ailments that qualify a patient for Ohio medical marijuana, but the number of qualifying medical conditions could go up to 26 conditions if Ohio approves more conditions this June. The Green Health Docs Advocacy Team explores what this could mean for Ohioans.

While the 21 conditions listed above are certainly a good start, the list leaves out vital ailments that patients regularly ask for, like anxiety, insomnia and even depression. While depression and insomnia are less commonly listed among qualifying medical conditions in states with medical marijuana programs, anxiety is more common.

Thankfully, Ohio does allow medical marijuana for pain this is either chronic, severe or intractable. Pain is easily the most common ailment our physicians at Green Health Docs see. That’s because chronic pain can come in a variety of forms, and stem from a variety of other ailments. To learn more about whether your pain qualifies in Ohio, check out this resource.

According to Cincinnati.com, Ohio is looking into adding five new qualifying conditions to their medical marijuana program. This process began in the winter of 2018, when the state invited Ohio doctors, patients and advocates to submit additional medical conditions for review.

Though dozens of medical conditions were submitted, the Ohio Medical Marijuana Control Program (or OMMCP) whittled the list down to five conditions. They are as follows:

If each of these five qualifying medical conditions are approved in Ohio, nearly every resident of the Buckeye State will be able to qualify for Ohio medical marijuana. It’s likely that 2 or 3 conditions will be approved, while the others will remain under review until more scientific data can back up claims.

Which New Medical Conditions Are Likely To Be Declined

Insomnia and depression are not likely to be granted approval by Ohio. While both of these ailments can be treated with medical marijuana, evidence is more scarce. It is possible that Ohio will skirt past the issue that neither ailment is commonly listed on any state medical marijuana program, but it’s not likely.

There is growing evidence that marijuana works to aid sleep. Patients suffering from insomnia have found that certain indica strains of cannabis help restore a natural sleep cycle and aide in overall sleep health.

Evidence also suggests that cannabis is effective at tempering depression. Right now, Ohio allows medical marijuana treatment with PTSD, but not other psychological disorders like bipolar, schizophrenia or borderline personality disorder. It is possible Ohio may consider depression, but more serious ailments may need to be considered first.

Opioid addiction is another popular qualifying medical condition that states like New York, New Jersey, Pennsylvania and Illinois have added. At current, the opioid crisis has become so devastating that it takes more lives than car accidents per year.

Approved for cannabis treatment in New Jersey and West Virginia, anxiety has a good chance slipping onto Ohio’s list. There is plenty of evidence that cannabis can help ease the symptoms of anxiety in patients. The only hold up may be the general term: anxiety. Ohio could kick the condition off the list for being too vague. A more specific version of anxiety — generalized, social, panic or phobia-based anxiety disorders — may have had better success. But we will see soon enough!

Getting a Medical Marijuana Card

The decision about which conditions will be added to Ohio’s program will take place in June. Watch this space for updates about the qualifying conditions. Once they are added, patients with the new qualifying medical conditions must obtain an Ohio medical marijuana card.

If you are an Ohio resident with a qualifying medical condition, our team at Green Health Docs can help you get a card. Simply call or text 1-877-A-420-Doc, or click on the ad found below. Getting a card is easy. And once your card is activated, you will have immediate access to Ohio medical marijuana dispensaries. So sign up today and get legal in Ohio!